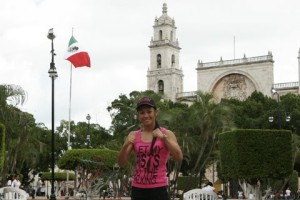 Boxing is a mindset.  It’s not for everyone.  Change is inevitable and comfort must be found in ceaseless change.  Being a world champion is no exception:  you must adapt.  Fighting internationally, being willing to fight in your opponents’ hometown is, in my opinion, the way of the warrior.  I remember the first time I had to defend my title against a Mexican fighter in Mexico.

I arrived in Merida, the capital of the the Yucatan Peninsula.  Everything was different:  the food, the scenery, the weather (it was hot and humid and the fight was scheduled for outdoors), the language, the culture, etc.  I had no idea of what to expect.  How will people respond to me?

The Philippines gave me huge support when I got there.  Manny Pacquiao, who has always been kind, took time out of his busy schedule in the Philippines (he was training for a fight) and wished me well during our Skype conversation.  It was televised all over the country.  I was thrilled.

Fortunately, the people in Mexico were warm and welcoming towards me.  When it was learned that I was there to defend my world title, I received applause and good luck wishes.  In Mexico, boxers are treated with great respect and it’s understood how tough the life of a fighter is.  Everyone at the hotel constantly asked if I was getting a good night’s rest and asked if I had any special diet requests.  Their utmost concern was making sure that I would be 100% ready to fight. 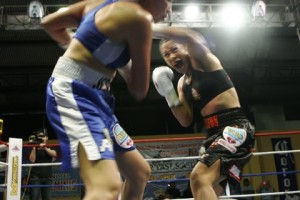 When I arrived at the arena, it was a different story.  I received jeers and whistles.  I brought the rivalry between two nations: the hometown of my parents, the Philippines, versus Mexico.  It was a rough battle, aside from throwing punches, there were clinches and an awkwardness in my taller opponent.  The crowd was against me and cheered when my Mexican rival threw a punch.  My goal was to make every scenario clear in the ring with clean punching and clever defense, not an easy task in hostile territory.

At the end of the 9th round, I received the worst end of a head butt that split my forehead open, leaving a stream of blood running down my face.  I felt confident on being ahead on the scorecards but was unsure of how bad the cut was.  I didn’t want any mishaps of the referee stopping the fight because of it.  Entering the final round, I kept my distance and found moments to fight toe-to-toe.  I had no fear of the cut and of my opponent.  When the fight ended, I received a standing ovation from people in the crowd, showing their appreciation of me fighting fiercely with an open wound.

During times of stress, I often hear the shouts of my coach reciting inside my head as he would during training:  “If you act strong when you feel weak, you’ll be stronger when you feel strong.”  Leaving our comfort zone and feeling vulnerable can build a wall in front of our goals; our fate is decided within a split second.  What is chosen becomes a responsibility.  I chose to defend my title under such circumstances.

Overall, my first experience in Mexico was BEAUTIFUL.  The people were genuinely hospitable and the food was absolutely DELICIOUS.  My favorite memory was seeing how passionate everyone of all ages is of boxing.  I eventually had a few more fights there and the support kept growing.  I love the people of Mexico and the hearts they carry for the sport.  When I enter the ring there, it feels like “home.”

This site uses Akismet to reduce spam. Learn how your comment data is processed.