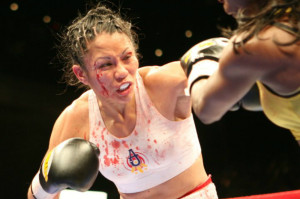 After spending a week in the build up of “May Day“, a fight of such high magnitude that had exciting press conferences and events, a celebrated dinner from the Nevada Boxing Hall of Fame, and brilliant fights, I woke up the next morning feeling like taking a long, long shower.  I had to mentally “wash off” the grime and disgust I’ve encountered as a woman boxer in this male-dominated sport.

Don’t get me wrong, I had plenty of wonderful experiences during the week:  doing interviews and sharing my thoughts about the fights and of women’s boxing; surprising my old coach, Freddie Roach, with a congratulatory speech of being inducted into the Nevada  Boxing Hall of Fame (which was nicely run by fellow California Boxing Hall of Famer, Rich Marotta); meeting up with old friends and making new ones; and of course, boxing.

But the most memorable experience I had was of a conversation with a man who openly shared his insensitive thoughts on women’s boxing–a conversation that I didn’t start.  Obviously, I respect other people’s opinions and I won’t say any names–even if I did, it may shock you, but then again, maybe not.  And believe me, this is far from being the first time I’ve experienced something like this.  I’m not here to complain or sob about the subject, I simply wanted to share it.  After the experience, I found it interesting that there are still people out there with ignorant beliefs despite what the world has adapted to.  In the world I know, where opportunities are abound for both women and men–people of all backgrounds–possibilities are limitless.  For example:  NBA player Jason Collins.  This conversation stood out because–without exception–this person needed me to understand his thoughts on women’s boxing (and this particular person wasn’t the only one I encountered throughout the week).

Anyway, this person…wait, before I continue on, let me give this person a name.  I’m going to call him “Richard”.  Anyway, right after the introduction, “Richard” immediately announced that he did not like women’s boxing.  Absolutely dislikes it.  He started to explain that he was a fighter, had fought many fights, and had a tough life.  He emphasized that he was taught to NEVER hit a woman and praised the idea of respecting women. 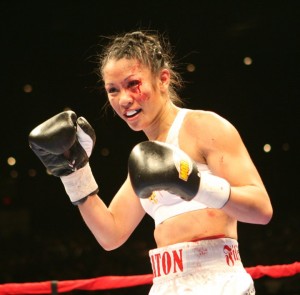 “Richard” then tells me a story of a little boy who got in trouble at school for punching a girl.  When the boy was asked why he did such a thing, he confessed that he saw two women boxing on TV; he figured that girls can fight, too.  Now, I also don’t condone anyone hitting another person, EVER (except of course, if it is agreed upon contract to do so), but I remained silent because the conversation overwhelmingly shocked me.  ”Richard” never said the actual words: “Women’s boxing is bad for society”, but to me, he craftily said it through his story.

I continued to listen because the subject intrigued me.  ”Richard”, without him ever knowing it, could never equate the idea that he was sitting next to a 3x world champion.  Nor fathom the idea of me fighting with cuts and blood running down my face, or finishing title fights with a shut eye, or match against an opponent in her own hometown in front of 40,000 people.  He had the slightest idea of what my background was and never took the time to ask.  This conversation was obviously all about “Richard”.

Then after all was said and done, “Richard” started talking about his single status and was looking for a partner.  I thought, “Unbelievable…,”  and he goes on a bit about that.  This amusing conversation must have lasted for at least thirty minutes.  Again, I didn’t say much for I was completely detested, yet I felt the need to listen. “Richard” was speaking to me with such intensity as if he had some built up tension, and found a “release” in me by venting every terrible thought he ever had of women boxers.

Ironically, towards the end of our discussion, “Richard” said he DEFINITELY wanted to watch me fight.

There are virtues in the art of listening.  Sometimes the truth eventually comes out.  In this case, I think “Richard” figured out he was being a real “Dick“.

“This is a man’s world…but it wouldn’t be nothing, nothing without a woman or a girl.”  -James Brown

This site uses Akismet to reduce spam. Learn how your comment data is processed.